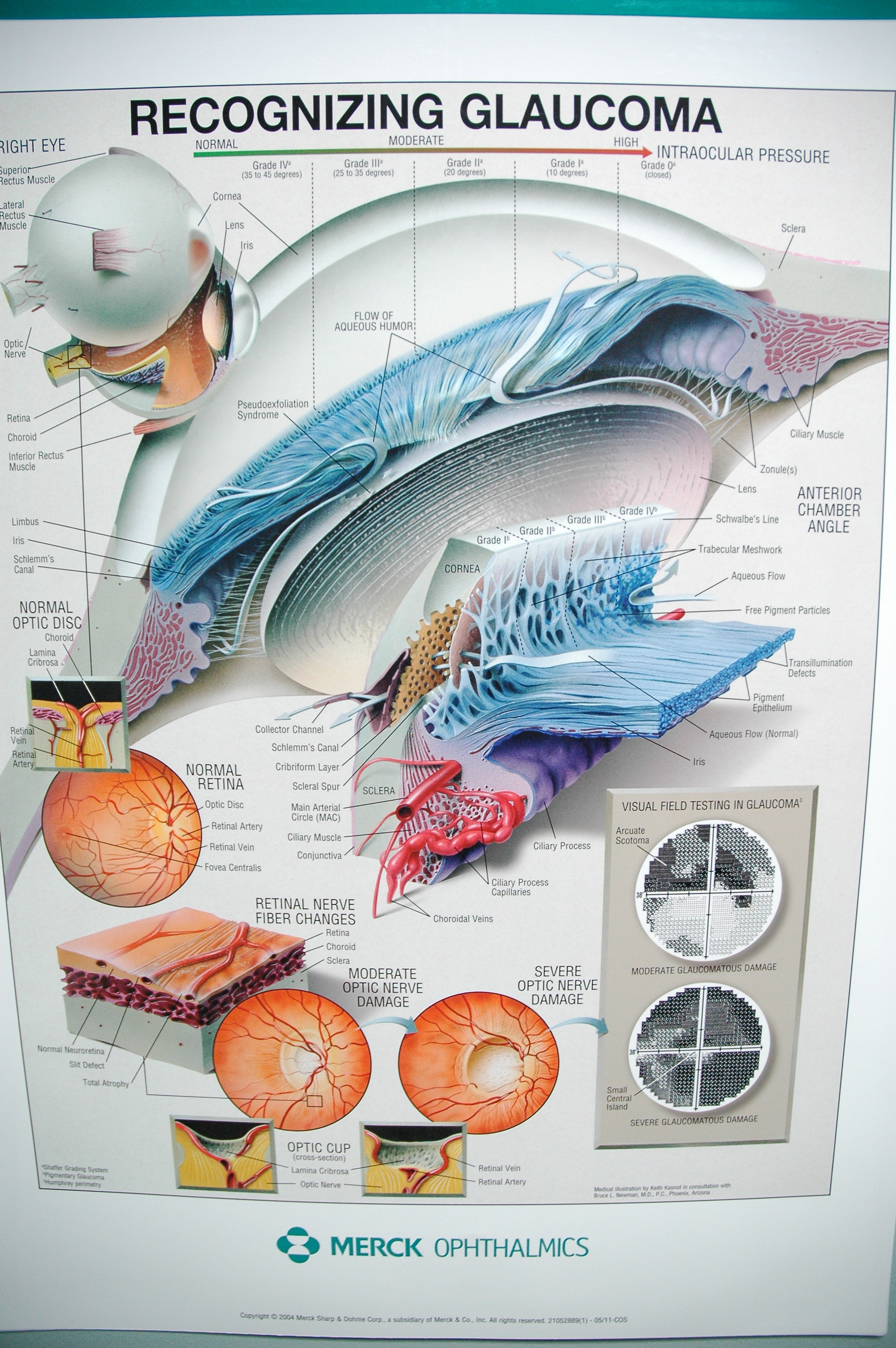 You've heard the expression, "Don't wait until the horses escape to close the barn doors".

That expression applies to glaucoma as well. Glaucoma, the silent thief of sight, steals away your sight. When it is finally discovered it is much more difficult to treat than if found sooner. Sadly, lost vision can never be recovered.

But what does that have to do with my grandmother and why am I so passionate about glaucoma? . . .

Because my Grandmother went blind from it!

She has been gone for many years but I can still remember the difficulty she had in her later years. My grandfather, her husband, was an optometrist like I am, but back in those days there were really very few accurate tests to catch glaucoma in its earliest stages. Think how frustrating it was for him, who had dedicated his professional life to helping people with their vision, not to be able to do anything for his own wife whom he had been married to for over 60 years. And the best eye specialists in the city were helpless also. The horrifying thing about glaucoma is that the longer you have it and don't treat it, the more difficult it is to control it.

They dealt with it as well as they could.

And they would even joke about it. My grandfather was nearly deaf and she was blind. So they said she was the ears and he was the eyes! Almost as sad as her inability to do the things that she used to love to do - cook (her apple pies were my favorite) and read - was the loss of her independence. She couldn't even walk by herself or find the chair to sit down at the dinner table. She could only recognize her grandchildren by their voices. They used to comfort themselves by saying that she would soon have new eyes in heaven. She got her new eyes in heaven.

Fortunately today we have MANY more ways of detecting glaucoma and MANY more effective ways of treating glaucoma. So there really is no excuse anymore for going blind from glaucoma.

But almost half of Americans with glaucoma don't know they have it.

Since glaucoma gradually reduces your peripheral vision you are not aware of the loss until permanent damage has already been done. For this reason, glaucoma often progresses undetected until the optic nerve is irreversibly damaged. In fact, glaucoma is responsible for at least some vision loss in the almost 3 million Americans estimated to have it. It is the leading cause of blindness among African Americans and Hispanics.

So what does my grandmother want you to know about glaucoma? She wants you to know that now there is no excuse for you to get glaucoma because of all the advanced testing and treatments available.

Did you know that Medicare will cover you for a glaucoma screening if you have any of these risk factors?

· Diabetics History of glaucoma in your family

What Increases Your Risk for Glaucoma?

· Glaucoma "running in the family"

Glaucoma is an eye disease that causes damage to the optic nerve. There are two major categories of glaucoma. Open angle (chronic) and closed angle (acute).

Open angle glaucoma is by far the most common. The "angle" referred to is part of the anatomy of the front of the eye that drains away fluid. Glaucoma is usually - but not always- caused by a build-up of pressure in the eye. Even though the "drain" is not physically small pressure still builds up and then causes damage to the optic nerve - the nerve connecting the eye to the brain. If the nerve is damaged all of the information that the eye is trying to send to the brain doesn't get there, and a loss of vision occurs primarily in the peripheral (side) vision at first. Later it occurs directly on center and then you have a devastating loss of vision.

How can you tell if you have open angle glaucoma?

The simple answer is that you can't. Only your eye doctor can tell for sure. If you have open angle glaucoma you are not likely to notice vision loss until it is too late - just like my grandmother. In fact, you can still have 20/20 vision and have loss of your peripheral vision from glaucoma.

The loss of sharpness of vision (visual acuity) does not become noticeable until late in the disease. By that time you will have tunnel vision and will be aware of a significant, permanent loss of vision.

What is acute angle-closure glaucoma?

This is much less common than open angle glaucoma. It occurs in approximately 10-15% of cases. The angle (drain) of the eye is simply too small for the fluid (aqueous humor) that is constantly being secreted to drain out of the eye. Therefore, if the drain becomes suddenly clogged, the pressure can quickly increase and cause very severe symptoms.

What are the symptoms of angle closure glaucoma?

· Severe pain in or around the eye

When should I see the eye doctor?

If you have any of the symptoms of acute angle closure glaucoma (see above) you should see the eye doctor immediately. If it is in the middle of the night and you are unable to see the eye doctor go to the nearest emergency room. Don't wait and expect the eye to recover on its own - it needs emergency treatment.

Otherwise, you should have regular exams with your eye doctor. He or she will be able to do many tests not only to determine if you have glaucoma but also to inform you if you are at a greater risk than normal for glaucoma. Remember that it is important to evaluate and determine the risk for glaucoma -even if you don't have it -and to treat it in the early stages before it causes any vision loss.

How does the doctor test for glaucoma?

Many tests may be done to test for glaucoma.

Tonometry - During routine eye exams a tonometer is used to measure the pressure inside the eyeball. An abnormally high pressure reading (IOP-intra ocular pressure) indicates a problem with the amount of fluid in the eye. Either the eye is producing too much fluid, or it's not draining properly. Normally, IOP should be below 21 mmHg (millimeters of mercury) though generally the lower the better. If your IOP is higher than 30 mm Hg, your risk for glaucoma damage is 40 times greater than if it is 15 mm HG or lower. Most eye drops are specifically designed to keep IOP low. However, pressure alone cannot be used to make the diagnosis because it is possible to have glaucoma even with normal pressure. Therefore, other tests are also used to diagnose glaucoma.

Visual field testing is a way to determine whether blind spots are developing in your peripheral vision as a result of glaucoma. Some visual field instruments are specifically designed to be sensitive to the loss of nerve fibers damaged by glaucoma. To do the test you look straight ahead into an instrument and click a button whenever you notice a blinking light in your peripheral vision.

Optic Nerve Imaging - This can be done by conventional visible light photography or by scanning laser polarimetry (GDx) or optical coherence tomography (OCT). The doctor will also evaluate the optic nerve directly by looking in your eye with an ophthalmoscope. The Fourier Domain OCT not only evaluates the thickness of the nerve fiber layer but also the ganglion cell layer thickness. The ganglion cells run from the middle part of the brain (lateral geniculate body) to the inner layer of the retina of the eye.( So they are as much brain tissue as eye tissue.) When they are damaged by glaucoma they begin to shrink. The OCT instrument can detect differences in thickness as little as one micron - one millionth of a meter- about 1/100 of the thickness of a piece of paper!

Gonioscopy - Specialized lenses may also be used to determine the structure of the anterior chamber angle. The presence of a narrow angle increases the risk for angle closure glaucoma.

Pachymetry - Another test that may be done is to measure the thickness of the cornea of the eye. It has been found that an abnormally thin cornea increases the risk for glaucoma.

How is glaucoma treated?

Eye drops with the goal of lowering pressure ( IOP) are usually tried first to control glaucoma. If drops are ineffective then surgery or laser, depending upon the severity, may be used. Because glaucoma is often symptom free and painless you may become careless about the use of eye drops that control eye pressure. In fact, failure to use the eye drops as instructed is a major reason for blindness resulting from glaucoma.

Did you know that Medicare will cover you for a glaucoma screening if you have any of these risk factors?

· History of glaucoma in your family

Additionally, If you are 65 and over and covered by Medicare call our office for a complimentary glaucoma screening.

We look forward to hearing from you

Find us on the map